The Aviation and Maritime Art of John Finch

Scheduled to coincide with the 80th anniversary of The Battle of Britain, an exhibition showcasing the fascinating and detailed work of artist John Finch opens on Saturday 12th September at The Guggleton Farm Arts, Stalbridge.

John Finch, who has been painting maritime and aviation subjects for 40 years, has recently moved to Dorset and this will be his first solo exhibition for 20 years. Much of his previous work hangs in collections worldwide with a considerable number of paintings documenting the era of the flying boats on show at the Bermuda Maritime museum. His work has also appeared in many publications, in particular The Battle of Britain by Roy Conyers Nesbit which includes John’s painting Ventnor RDF Station, the only known visual depiction of the site as it was in 1942.

The body of work on show at the Guggleton this month consists of oil paintings depicting a vast range of subjects within the aviation and marine genres. His aviation subjects range from the biplane fighters of the 1930s, to the jet age of the 1950s, and includes the spitfires and hurricanes of the 1940s. The marine paintings span from the Age of Sail to the express liners of the 1930s, and there are a number of Fleet Air Arm paintings showing Royal Naval carriers together with their air component. A proportion of the profits from the sale of these paintings will be donated to the Baracuda restoration project at the Fleet Air Arm museum.

Graham Mottram, Chairman of the Society of Friends of the FAA Museum and Director of the FAA Museum 1995-2015, will speak at the opening reception; in particular reference to some of the paintings, on their continuing importance and on the work of the Museum in context.

The talk will take place between 2 and 4pm outside and undercover, with an opportunity to view the show, in the gallery, in small groups. Refreshments will be available. Free tickets to this event are available here.

To coincide with the show ‘Four Contemporary Landscape Painters’, in the Milking Parlour Gallery at Guggleton Farm Arts, featured artists Hester Berry, Day Bowman, Rita Brown and Sam Travers will be in discussion with local printer and sculptor Sasha Constable, a direct descendant of John [whom we believe dabbled in the odd landscape himself…]

The artists will be in conversation at this socially distanced event on the Friday 31st of July at 6pm when refreshments will be served. The event is ticketed [but free] and these can be reserved here. 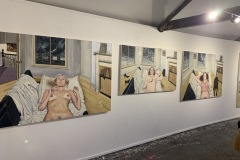 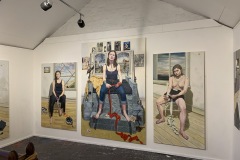 To coincide with her Guggleton Exhibition – ‘WENDY ELIA – Significant Works to date’ [in the Milking Parlour Gallery 1st – 11th JULY], Wendy will be teaching a Masterclass in oils, mixing and portraiture.

On the 11th of Joy you are invited to join Wendy between 10.30 and 4.30 for a full days’ class and light lunch. Places cost £80 and are limited so please book early to avoid disappointment. You can secure yours by either emailing back here or calling the gallery on 01963 363456.

Wendy works in series which explore the social and broader contexts of our times. In her portrait work she confronts our voyeurism and asks questions about the female gaze and painting’s relationship to authenticity and illusion.

Elia moves from the personal to the political not only in the range of content and form in the various series, but also within individual paintings: using a range of pictorial symbols and signifiers to extend the meaning/narrative of the works.

She trained at St Martins School of Art, London and has exhibited widely being a finalist in a number of national and international competitions which include 4 times at the National Portrait Gallery, as well as The Sovereign European Art Prize, and The Threadneedle Prize. Her work is also held in a number of public permanent art collections across the country.

In 2012 she was commissioned by Sherborne House Arts and B-side (funded by the arts council) to paint a portrait of a local sports person as part of the Cultural Olympiad in Weymouth and Portland. Her work appeared across the town in poster form on walls and bus shelters as part of the Olympiad curated by Deanne Tremlett.