A place to become

ZARA McQUEEN is a self taught working artist. In her words: “Drawing and painting is part of who I am. It is how I respond to my world. I am driven by mood and intuition. I always begin outside- in that sense I am a landscape painter. Seasonal changes catch my attention and I can rarely resist the changing colours and textures of the natural year. I sketch and paint in charcoal, watercolour or oil and then return to my studio where I make larger mixed media pieces guided by memory and feeling. Work gets cut down, torn up, collaged and reformed. Fragments of self portraits and other work lay hidden in fields, branches or buildings.

I was born in East London in 1962 and moved to Shaftesbury in North Dorset in 1995 where I currently live and work”.

SALLY RIDOUT was born in Wales and moved to Africa with her parents at the age of 5. She trained as an Art teacher in South Africa and came back to the UK in the early seventies where she has taught Art for 40 years. She gained an Advanced Diploma in Art Education from the University of Wales Institute in Cardiff in 1989 on one of the last secondments offered to State Educational teachers, and in 2015 she retired as Head of Art at Sherborne International, where she had taught Art to GCSE level for 20 years.

Since retiring, she has concentrated exclusively on her own work, predominantly as a landscape painter in oils and acrylics in both a realistic and semi abstract style, and has recently embraced digital manipulation in the development of some of her work.

Her subjects are the rolling hills and valleys of Dorset where she lives; ancient hill forts and trails in particular, and she always works from original “en plein air” studies.

She is a member of the artists303 group and has exhibited locally since 2010 in both the Dorset and Somerset Art weeks, with artists303 at the Meeting House Ilminster in 2017 and at ACE arts Somerton in 2018 and has recently held a ‘solo’ exhibition at the Shaftesbury Arts Centre in July2019 entitled “Over the hills and far away”.

Sally has sold work locally and abroad and taken up commissions. She continues to be “wide eyed” about anything creative and is happy to be perpetually challenged by her desire to produce work which is expressive, skilful and yet accessible to all.

For two weeks in dull, dreary January@thegugg we had an AMAZING TIME! Thank you so much to all the students and staff of Stalbridge Primary School who began our giant gallery drawing so well! After their 3 day ‘residency’ in the Gallery friends, family and neighbours were able to come and be inspired by adding and reacting to their hard work. The work eventually filled the entire space!

A follow up exhibit featuring the work of seven of our Summer Open GO FIGURE artists which has been created as a direct result of challenging their practices’ since meeting and discussing their work in August.

Artists included in the exhibit are:

CONGRATULATIONS to all the winners and highly commended artists of the Isabel de Pelet Young Artist of the year exhibition. Awarded on Friday evening at the preview and selected by the ladies of Blackmore Vale Division of the Arts Society, William Montgomery took the top prize for his bronzes ‘Fox’ and ‘Kudu’, Peter Hazard took second and Sharon Hutchings third.

DAVID BURNS AND MARY TAMBINI – in the Milking Parlour 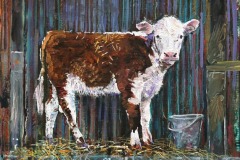 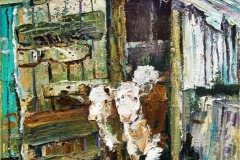 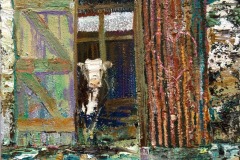 Born in 1942, Alex Williams trained at St Martin’s School of Art and The University of Wales. He became an art teacher, later Head of Art, at schools in Hertfordshire before moving to Hay-on-Wye to set up his design and print studio. Moving to the Welsh Border country in the late 1970’s was catalytic in his development as a painter of farm landscapes, animals, buildings and agriculture.
His work was widely exhibited in the UK and Alex then moved to Los Angeles for three years, exhibiting there and undertaking commissions for Tom Jones and Jackson Browne as well as for magazines and companies. His images have been widely used in Tableware and Fine Bone China, Limited Edition Prints and Greetings Cards.
His versatility also extends to numerous TV appearances as artist and art teacher, in Australia as well as in the UK. He has exhibited widely in both individual and group shows and his work is in many public and private collections;
The National Museum of Wales has purchased a number of his landscapes of the Welsh Borders and he has collaborated very successful with the National Trust on a range of products.
His recent show at The Fosse, “Only the Lonely” brought together his love of “Period Rock” (his term) and the lives of farming folk their live stock and rambling buildings.

A selection of works produced by the group of artists who meet in the Art Barn at the Guggleton to work with Carolyn on individual, personal projects and to develop their skills. On show are works by Michele Geiser, Ian Ross, Alice Corlett, William Webb, Peter Mole, Maria Oatley, Jennifer Morisetti, Kate Mallabone, Wendy Keenan, Alan Woodward, Julian Turnbull, Lyn Comrie and Sarah Marsden.

The Guggleton’s Milking Parlour Gallery hosted a successful ‘Secret Postcards’ Exhibition on Friday 27th and Saturday 28th September – raising over £2,600 for the Home Start North Dorset charity.   Approximately 70 friends and supporters attended the event and bought most of the 120 cards (displayed anonomously) which had been created and donated by 70 local and national artists, including a few celebrities such as Dame Judi Dench, Sir Antony Gormley, Laurence Llewelyn-Bowen and Ivana Trump.  Local celebrities, aka ‘The Pearlies’ Dave and Paula Hemsley, also attended to add a bit of sparkle. Photographs courtesy of Sally Evans Photography.

The remaining cards are now displayed and available for sale (with the names of the artists visible) on the Home-Start North Dorset website for £40 each.  Interested purchasers should visit www.home-start-northdorset.co.uk/news/   to review and select a card, donate £40 on the ‘Donate’ page, then email Chelsey Gowen at  chelsey@home-start-northdorset.co.uk to organise postage of the card.  Home-Start North Dorset is the local arm of the national charity which raises funds to recruit, fund and prepare parent voluteers to support and assist disadvantaged local families with young children struggling to cope. 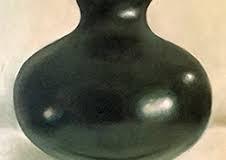 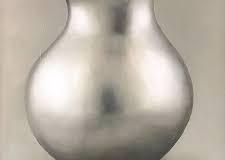 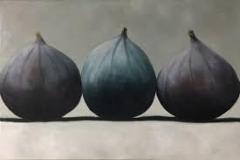 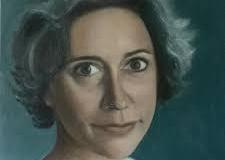 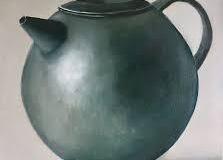 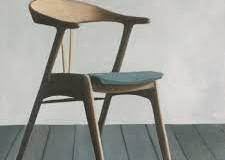 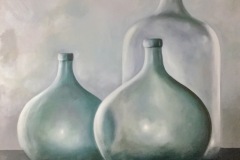 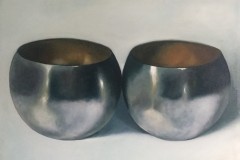 Agnes was born in Holland in 1973. She read Philosophy at Amsterdam University, specialising in Eastern Philosophy. During and after her University she dedicated a lot of time to Find Art and taking art classes.

Influenced by both the exquisite revealing light of early dutch paintings and by the simple beauty found in Japanese ceramics and art, Agnes paints with focus and clarity Her preferred subjects are simple bowls and vessels. In her paintings one recognises Agnes’ Dutch roots through the delicate interplay of light shadows and reflections. She studied and taught herself techniques used by the Dutch Masters to enhance luminosity and depth of colour. The colours she blends are subtle and muted the results are quiet and contemplative, reflective and promising.

GO FIGURE
20th July – 1st September 2019
Our exhibition, GO FIGURE, was a mixed media show selected by artists Wendy Elia, David Cobley and Anthony Connolly, from an online submission call. Works included take their point of origin, or departure, from the human form….
The private view on the 19th of July was a well attended affair with both participating artists and guests gathered to here the announcements of who would win the GO FIGURE prizes.
CONGRATULATIONS go to Millie Gleeson, who took the first prize of a solo show at Guggleton next summer, and to Sasha Constable, Sue Baker and Matthew Hayward who were awarded a joint show to follow Millie’s.
Thank you to all the 25 artists who were eventually selected for the final show, and whom Guggleton hopes very much to be working and collaborating with in the future.

GUGG EGG
APRIL 13th – MAY 5th 2019
Thank you to all the artists who submitted and were selected for the GUGG EGG exhibition.
Guggleton Farm Arts is delighted to announce that the winner of the solo show in September is Agnes Pollock. You can see more of Agnes’ work here:
www.agnespollock.com
If you are interested in either contacting or buying from any other of the artists who appeared in the show then please do contact the gallery, and keep your eyes peeled [ok, ok, ENOUGH with the egg puns] as you will be seeing more from them at The GUGG!